To Hagar. Hijer. My sister.

After many years, I am once again reading about you and your story.  It is good that I am doing this, my dear one.  It reminds me how important you are in our history.  And the more I read, the more my soul is bound with yours.

You, Abraham's concubine, were passed on to Sarah, who passed you back to Abraham so that you would provide him with a son. Back and forth.  You were persecuted because you were a stranger, because you were loved and loving, because you didn't belong.

You were made up of all possible contradictions, in your life and after your death:  Royalty and slavery; a symbol of supreme maternal devotion but also of obedience to the patriarchal, economic, and class structure; the mother of Ishma'el, the founder of the Arab nation, the source of inspiration for religious texts but also the symbol of expulsion, of otherness.  So many words have been written about you, and I search for you in the mounds of interpretations, appropriations and sophisticated debates.

Your story is composed of infinite materials.  It is not one story, but rather, many.  And from these many, I sit and pull out the threads, one by one.  First, the thread of you and Sarah.  The woman who must have felt very ambivalent about you, burning with intimacy and jealousy.  I find myself angry with Sarah.  After all, you, the handmaiden, were the victim of a social and economic order that placed the will of your master above your own.  Perhaps both of you – you and Sarah – were victims of the patriarchal order that measured and valued women according to their ability to give birth, to produce heirs (preferably male, of course).  That same order that did not allow Sarah to create a close, loving relationship with you.

And then I pull out the thread of motherhood.  The thread that turned you into a model of devotion and grace.  When you put Ishma'el your son down, and went off to seek water and to spare him the sight of his mother weeping over his bitter fate. The fate that awaited both of you.  In the end, you were both saved.  Thanks either to your resourcefulness and tenacity or to the hand of God. The Bible tells us that God revealed himself to you.  At that moment, were you overcome with awe, or simply tremendously relieved that your life and the life of your son had been spared? 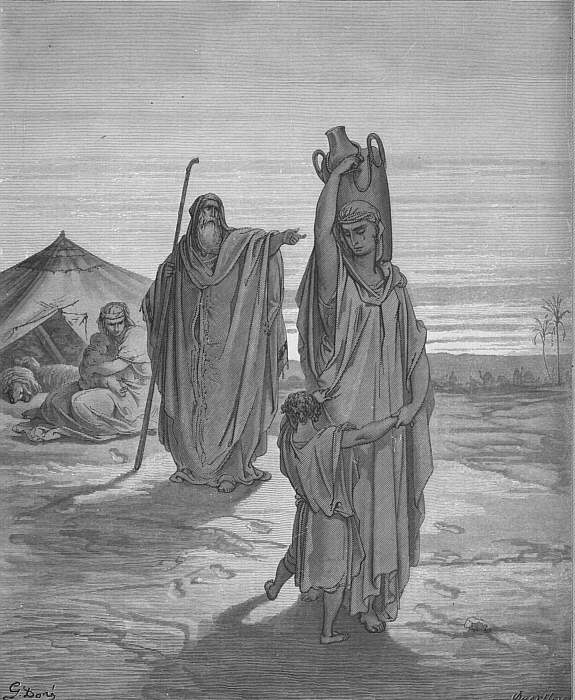 What did you want, Hagar?  Did anyone ever ask you what you wanted? You – who refused to sacrifice your only son whom you loved.  You – who withstood all of the tests.  What did you want?  What were you thinking about, as you sat in the desert, crying bitterly over your son?  Did you know then, as your were banished a second time, that your son would become a great nation?  That your banishment from the home of Abraham and Sarah would lead to one of the most bitter and harsh conflicts in history, a conflict that eats away at our hearts to this very day?

I cannot but think about what would be if Sarah had not demanded that you be sent away.  If Abraham had not given in, without even protesting.  Perhaps Isaac and Ishma'el would have grown up together as brothers, despite the age difference between them?  Our history in this space – as Arabs and Jews – would be very different.  And in these difficult times, I think about what we women – mothers, sisters, friends – can do to help to heal this open wound, to right the terrible historical wrong of your banishment.

I don’t know what you would have wanted.  They have all taken ownership of you.  Judaism. Islam.  Even Christian scholars have made their interpretations on your back.  I don't want to appropriate you, or your story, or your life.  But every so often, I would like to have another conversation with you.  If I may.

Written in 2010, for a special exhibition by feminist Mizrahi artist and leader, Shula Keshet, on Biblical Heroines