Alarm and Conquer: On politics of Fear

Years ago, studying group facilitation, we learned about Projective Identification. The example given to illustrate this interpersonal dynamic was the following: The parents go out and leave their two children home alone. The big brother – afraid of being alone with his little sibling and ashamed to admit it – begins telling him horror stories of the monsters lurking in the dark and the burglars encroaching on the house. With little brother terrified, big brother assumes the role of watchful protector, promising with soothing words that he will safeguard him. Thus, the big brother projects his fears unto his sibling and can take the mantle of adult and saviour.
This pathological dynamic grows more and more characteristic of the relationship between he who leads the Israeli government and the citizens of the state. First they terrify us to death so we feel existentially stifled with fear as we ever were, then they pass the nation-state law and promise us it alone will keep us from harm. They pound us with horror stories of those lurking in the dark — Arabs, lefties, traitors, destroyers of Israel — and persistently delegitimize the sources of our fears.
Let it be clear: real, harsh threats do exist. A nuclear Iran is a very disconcerting scenario. Incendiary kites and balloons are a stark nightmare come to life, and missiles raining on the Gaza border communities and across the Negev pose a true danger. Fear is the most human reaction to a reality which exceeds the foulest imagination.
But it is no less terrorizing when intimidation becomes the form of rule. Because when we’re afraid, our brains shut down to the bare essentials. To the part that asks: “Am I predator or prey? Fight or flight?”
When cowing becomes the method of the government, it is very easy to turn any resistance into a threat. Under the rule of fear, people slowly begin to believe that the only ones capable of leading the country are the very ones violently trampling its essential values. For in a state of terror, things like equality, diversity and democracy become the nonsensical luxuries of the weak and the naive, of those who don’t understand all the Arabs want to chuck us into the sea.
Intimidation is a form of emotional manipulation stripping us, the people, of our agency to rise up and make our voices heard. It insults our capacity to observe reality and form a nuanced opinion.
“I don’t want my country taken from me,” wrote me a friend on Facebook in response to things I had said about the protest against the nation-state law. I wholeheartedly empathize. I too want a country to live in, where I feel safe and protected. I simply don’t believe the path to ensure my security as a Jew treads through stripping the collective national identity of Israeli-Palestinians citizens, erasing their language, culture and history from our shared public domain. 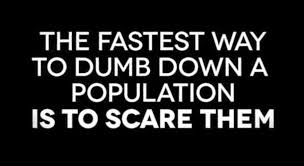 “So what do you want?”
I want us to stop being afraid. I want us to have a piercing, turbulent, complex dialogue about the fact that this country is shared by two peoples: a Jewish majority and a Palestinian minority. I want vibrant discourse in which many voices are heard, and a joint search for worthy solutions. I want a discussion that doesn’t force me to choose between security and equality, sovereignty and democracy. I want to stop and ask questions about which kind of “Jewish” nation-state are we talking about. Chief Rabbinate Jewish, or diverse and pluralistic Jewish? I want a conversational space devoid of threats of revoking my “loyalty credentials.” When have we become a monarchy in which subjects are asked to pledge allegiance to the overlord?
Eleanor Roosevelt said “Do one thing every day that scares you.” Yes, we need to step outside of our comfort zone every day and grapple with the fear that comes with venturing into uncharted lands. Yes, It is scary to oppose intimidation. it comes with a price. But if we secede to fear, we entrap ourselves in a mindset of hunter and hunted. I don’t know, for some reason that scenario doesn’t make me feel very safe.

This site uses Akismet to reduce spam. Learn how your comment data is processed.